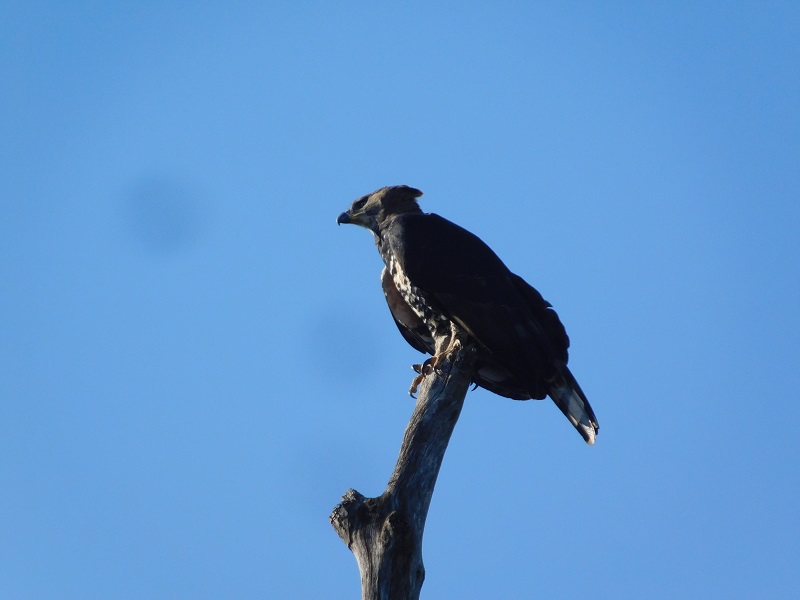 This bird, one of the largest raptors in the country, 80 – 90 cm, displays a crown when excited.

It ags a black bill, pale yellow iris, dark grey cere and yellow gape and feet. It is rufous below with heave black barring, including the tarsal feathers and the tail is boldly barred black and white. It appears very broad winged in flight with a checkerboard pattern when light shines through the wings.

It feeds mainly on hyraxes, monkeys, small antelope, mongooses, hadedas and genets and anything that looks similar that they can ambush, ie domestic pets.........

They often work in pairs, one of them chasing the prey into a favourable area, from which the partner attacks the prey. They are very adept at diving through trees to catch their meal.

It breeds August to October, laying two dullwhite eggs which are somtimes spotted with reddish-brown and purplis-grey. Only one chick suvives, the older and stronger killing the younger.

Somewhat smaller than the crowned eagle, the longcrested eagle is 53-58cm in length. It's voice is something like keeeeee-eh, sharp hihg pitched kik-kik-kik-kee-eh.

I have often confused the two birds (the crowned eagle) when seeing them in the trees. The size and calls are quite different.

They tend to be solitary, sometimes hunting in pairs. They do not soar often, and then not very high. They often perch on the top of trees, on telephone poles and fence posts. They fly from perch to perch.

The prey is hunted from a height.  Mainly rodents and shrews, a few birds, anthropods and reptiles. They very rarely eat fruit. 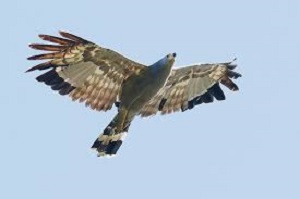 This bird is very rarely seen out of the air in Leisure Bay. They are usually solitary, seen flying high, soaring hunting for food. Sometimes sitting on a high branch and watching, or walking on the ground, clambering over fallen trees with loosely flapping wings.

They eat reptiles, amphibians, birds and nestlings, small mammals, insects and birds eggs.They are quite large, up to 67cm. With knees that bend the "wrong" way, they can reach into nests with their claws to pull out the nestlings. 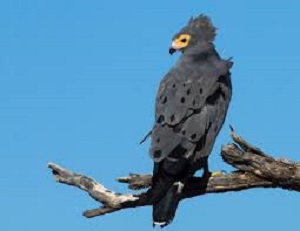 They are usually silent, but they have a plaintive high-pitched whistle su-eeee-oo in flight. Also a high pitched wheep-wheep near the nest.

The breeding season is June to November (peak September to October). 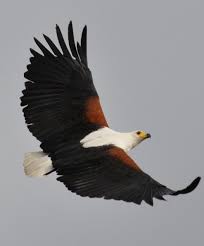 They usually perch for hours in a tree next to water during the day. Their food consists of fish, mainly 1kg, sometimes 3kg. Also monkeys, dassies, monitor lizards, frogs and insects. They also eat carrion, waterbirds up to the size of flamingoes, waterbird eggs and nestlings. In flight they steal other fish-eating birds' catches.

They lay 1-3 eggs in June to August. The young are fed mainly by the female. The male will feed only the small nestlings. Out of three eggs, only one or two will survive. They remain dependant on the parents for up to sixty days after first flight. 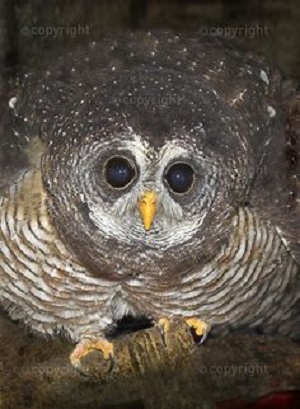 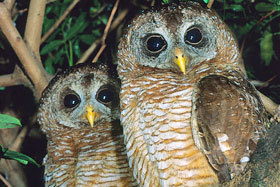 These gorgeous and beautiful birds, while only seen mostly at night but sometimes seen on a branch sleeping while waiting for nightfall, are probably the best known of the owls in Leisure Bay by their call at night. Regretably they are moving elsewhere to nest because of the construction of new residential properties. They are about 30 to 36cm in length.
The well-known voice is a syncopated Wu-Hu Wuhuhuhu, the first wu being higher pitched than the rest. I assume that the male has the deep bass call of WU. There are often sounds of WU followed by the other bird, a higher pitched wu When they spot prey the call changes to wu-hu-hu-hu.
I have been fortunate to see a pair of them in the erf next to my property. A pair of them watching my cat eyeing them and thinking "daft cat....you'll make a good meal!

Fortunately they do not attack pets! They are curious birds and will sit on their perch watching you unless they feel threatened.
Their main diet is insects. They will also eat rodents, frogs, birds and centipedes, with the odd snake thrown in. Unfortunately, my pictures did not work out because of the weird light. I do thank the guys that took these beautiful pics for their use. 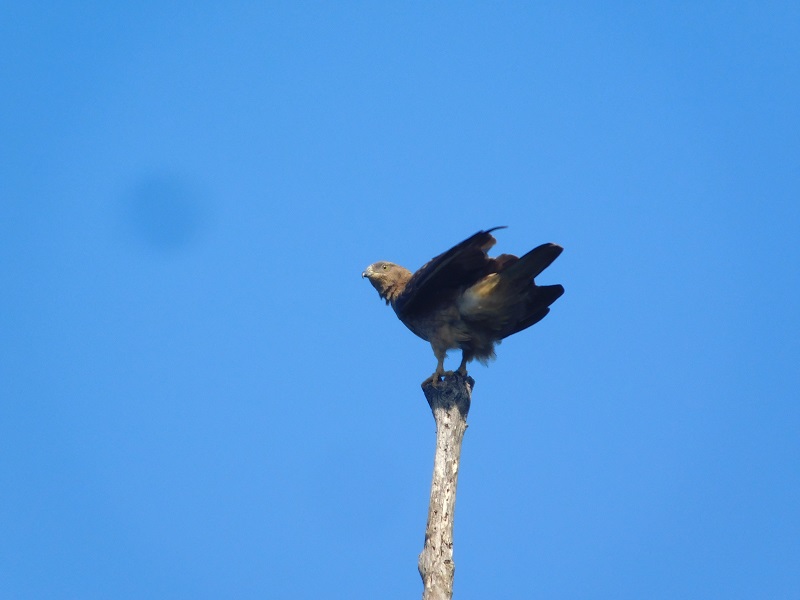 The honey buzzard is not seen that often in Leisure Bay, but it is a treat when it is seen. I have never heard it’s call, but it likes to perch high up looking for prey.

They have a length of +- 60cm with a wingspan of +- 140cm. The coloration is variable, light to dark brown all over, except for the head, which is greyish. They have a bright yellow iris in the female, orange in the male. The bill is black with dark grey cere and yellow legs and feet.

It looks very similar to the Steppe Buzzard, but has a very slender bill and head, almost the appearance of a pigeon. It has two dark bars near the base of the tail and one broad dark bar at the tip.

They tend to be solitary and somewhat sluggish.

They feed mainly on wasp larvae and pupae, and other insects, spiders, worms, small vertebrates, nestlings, birds' eggs and berries. The dense feathers on on the face and the heavy scales on the legs protect them against wasp stings. 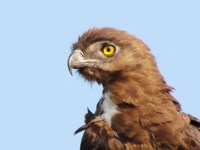 This Snake Eagle is very rarely seen in this area. Only a very feww have been spotted here. It prefers the Northern part of the country, but as it has been seen here, I have included it.

It is the largest of the Snake Eagles, measuring up to 76cm in length. It has a wingspan of about 200cm. It has a black bill and bright yellow iris and the cere and legs are greyish-white.

They prefer woodland, savanna and drier bushveld. It hunts from hilltops and the tops of trees, sitting waiting for prey. It kills and swallows prey on the ground.

It eats snakes up to 3m long, including cobras, adders and mambas and also the Nile Monitor.

Another of our beautiful birds.Unfortunately we do not hear them as often any more. There are still a few here and hopefully they will return. I have never seen them, but their calls, intrspersed with those of the wood owl, was like a lullaby.

They are quite large, about 45cm, and they are common throughout the country. They feed on mostly anthropods and also guinifowl (and similar sized birds), reptiles, mammals, frogs and sometimes fish.

I remember my cat, once again, staring at this big bird, wishing it would come down. The owl just looked back with cotempt on it's facade. 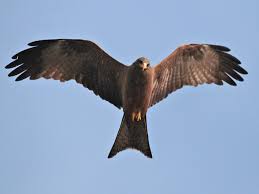 The length of this bird reaches about 55cm with a wingspan up to 140cm.

It has a yellow iris and yellow bill, hence the name yellow billed kite.The cere, legs and feet are also yellow. The brown body and slightly forked tail are diagnostic in all sub-species. Unlike the eagles who have feathered legs, the legs are bare.

They are mostly seen hovering over roads, looking for roadkill, the tail twisting in all directions.

They breed September to November, laying 2-3 eggs which are white with brown and grey markings.