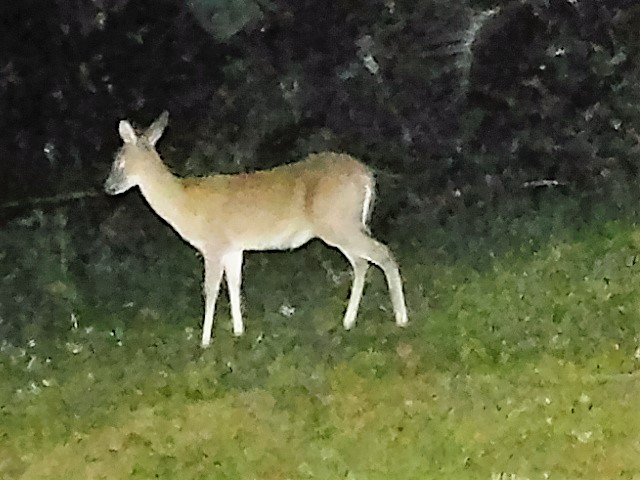 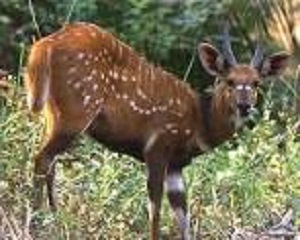 This lovely antelope is mainly a browser. It is fairly tame and does not readily run off if it sees humans. It is diurnal and, in Leasure Bay, can often be seen browsing on vacant lots. They tend to become nocturnal in heavy populated areas. They can often be seen from human dwellings.

They are the largest antelope in Leisure Bay, the male weighing up to 77Kg and the female up to 36Kg. They are not territorial. 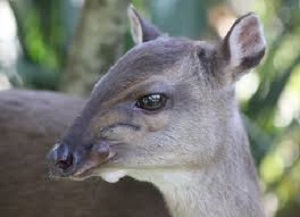 This antelope is protected in KZN and is the smallest antelope in Southern Africa, measuring 300mm at the shoulder (about the size of a large cat.

They eat fresh leaves and fruit dropped by monkeys, which they follow around waiting for the almost-whole fruit to be dropped.

They are the main diet of the crowned eagle and, in Leisure Bay, are poached by hunting dogs and snares. When alarmed they give a high-pitched screech and if trapped or injured they cry like a baby.

Once caught in a trap they usually die from shock. 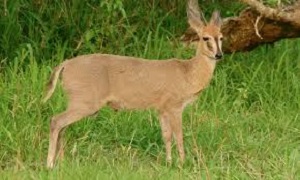 Duikers are so named for their habit of diving into the bush when disturbed. They are not reliant on water and live off leaves, fruit and seeds. They are the only antelope kown to eat carrion and insects.

Their predators in Leisure Bay are crowned eagles and pythons. Also seriously subject to poaching. 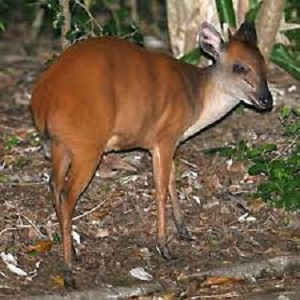 Not seen that often in Leisure Bay, this antelope is protected in KwaZulu Natal is listed as rare in Southern Africa. They are slightly smaller than the grey duiker, about 12Kg. The tend to be more diurnal and less secretive except in very busy areas.

They are territorial, marking their territory by excreting a substance from glands behind the eyes and rubbing it onto grass, branches and bark.

They feed on leaves, fruit from monkeys, flowers and low-growing shrubs.

They have more red on the sides than the other duikers.

If you grab it by the tail it clings tightly to the object it has grabbed, then the fur comes away, allowing the mouse to escape and leave you with the fur in your hand, and feeling very guilty!

This lovely little animal does not do well as a pet as it's care is complicated.

It has lovely silky fur and the tail is bushy and long, about 80% of the body and head length of this rodent.

It is omniverous, eating insects, seeds, invertebrates, leaves and fruit. I have even waken at night to find one eating from a bag of mexican chillie crisps!

It builds a nest in a hole in a tree and is mainly arboreal. 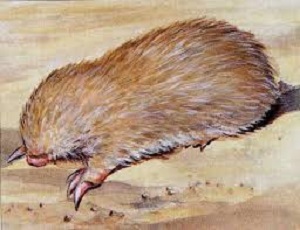 This is the mole that I reckon I rescued from my frog pond. Unfortunately at the time I did not know that the Kwazulu Natal Provincial Conservation Department was attempting to document these creatures, otherwise I would have kept it for identification by said authorities. It is listed as vulnerable, but authorities believe that they are more threatened than that. The last recorded sighting was in Glengary, Natal, in 2003, the previous recording taking place in 1974. They are nocturnal and not easy to spot.

They sometimes feed above ground on worms and insects (not garden plants). They live in passages and chambers interconnected by a series of tunnels. They are blind and can only distinguish between light and dark through the hairy skin covering their eyes. 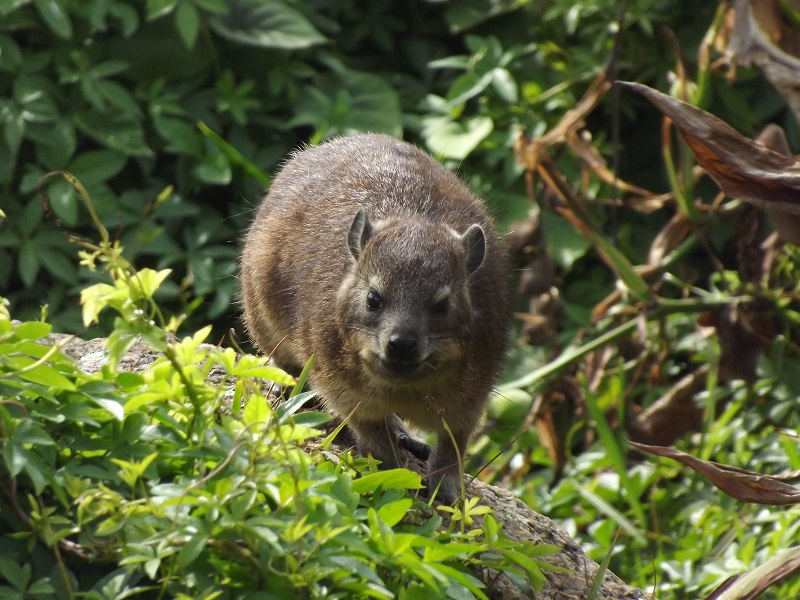 The rock hyrax. This beautiful creature can be seen all along Leisurebay's  coastline. There is a spot called Dassie Rock, complete with a sign. When you walk along this trail you must be blind if you do not see these gorgeous creatures. They whistle a warning when anything approaches, so try and be quiet! Just look into the rocks and you will almost certainly see them! An endangered species. 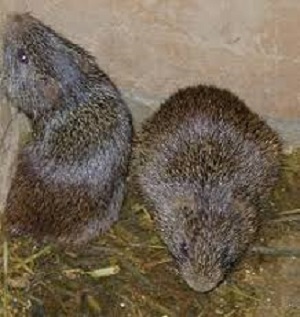 This rodent range in body length from 35 - 60cm.  They can weigh up to 10Kg in the wild, a little smaller in captivity.

They are regarded as a pest by the sugar cane farmers, who spend a fortune trying to fence them out. They also eat crops other than reeds and cane. They are heavily built and in some countries intensive farming has been experimented with for food. The meat is higher prtein and lower fat than domestically produced meat. The meat is also highly prized for its tenderness and taste.

They produce 2 - 4 young at least once a year, and more often in some areas. They are sexually mature at 6 months.

Research carried out over the last 20 years has allowed the selection and improvement of stock for captivity. Practical information is now readily available for cane rat farming, but practical training is still advised.

Cane rats are not the most prolific of rodent species, but the high demand, attractive market price, and the small amount of investment required makes cane rats a suitable mini-livestock activity for income generation in many parts of West and Central Africa. 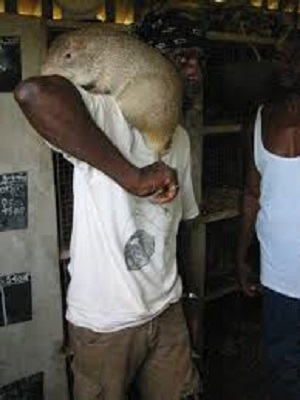 There are areas where they have been over-hunted, and savanna habitat is often at risk during the dry season from bushfires, which are lit during bushmeat hunting expeditions. However, the high exploitation of cane rats in the wild has not had a serious effect on their numbers, and in fact some researchers believe that their populations may actually be increasing due to deforestation and changing land use patterns in West Africa as they have adapted to deforested areas and occur in close proximity to farmlands and people.

They are not encountered very often in Leisure Bay.

Some of this information was taken from Wikipedia. 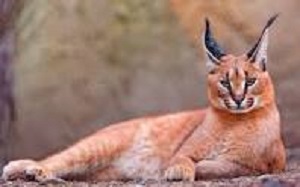 This beautiful but dangerous kitty has long legs, long tufted ears and long canine teeth. It reaches 40 to 50cm at the shoulder and weighs up to 18 Kg. It is nocturnal and very difficult to observe. One resident in Leisure Bay heard a noise on the roof, and when she went out to investigate, saw this large puddycat jumping off the roof.

It preys on small mammals and rodents. It can leap higher than three metres to catch small birds.It lives up to sixteen years in captivity.

Keep your small doggies close and out of harms way - don't let them stray! 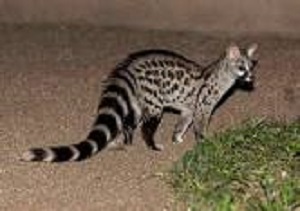 Lovely but vicious! It has retractile claws, which makes it's spoor easily identifiable. Almost entirely solitary, It lives in trees or holes in the ground. If you are lucky enough to see one at night, especially at an unattended braai fire, You will probably see two glowing eyes watching you. Don't panic! Stay still and wait for it to leave and you will see it's gorgeous colouration.

It can become tame, taking food off tables (known to happen in the Kruger Park).

It has a diet of small mammals, bats, insects, frogs, miilipedes, centipedes and scorpions. And of course braai meat and whatever else is on offer on the dining table!

This mongoose is much smaller than other species, up to 28cm. The soft fur ranges from yellowish red to very dark brown. They tend to favour areas with plenty termite mounds, where they take up residence. They can become very tame and many people feed them when they arrive for breakfast. If you do it often enough they will raid your kitchen when you are not looking. The banded mongoose can reach a length of 45cm and a weight of up to 2Kg.  They are darker in wetter areas. They live in termite mounds but do not live in the same residence for any length of time. They live in larger groups than dwarf mongooses. 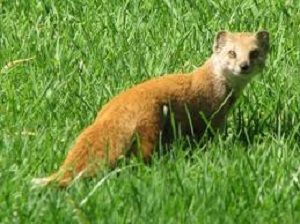 Also known as the red meerkat is about 500mm in length and wheighs about 1/2kg. It is the only member of its genus, but there are as many as 12 subspecies of yellow mongoose. The northern subspecies tend to be smaller, greyer and have shorter hair so as to cope with the higher temperatures.

It is mainly diurnal but night time observations have been observed. They live in colonies of up to 20 individuals in a burrow complex. They co-exist with Cape ground squirrels and suricates and share maintenance of the warrens. The toilet is outside one of the numerous entrances. 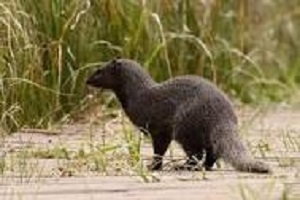 This is a medium sized mongoose, although large fo a mongoose. It can weigh up to 5Kg and a bit more.

In captivity they can live up to 17 years. 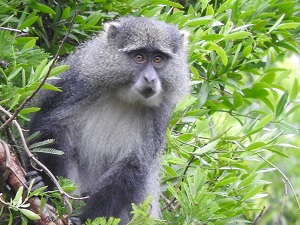 The samango monkey is listed on the Red List as "vulnerable". They are slightly larger than the vervet monkey and have puffy cheeks.

They are mainly arboreal and very rarely come to the ground. They very rarely make a sound and do not enter human habitation.

University of KwaZulu Natal's Forest Biodiversity Programme suggest that these animals do not diperse from their restricted forest patches and that their future survival as a species is far from certain. It's population has declined by 30% over the past 27 years.

Their diet consists of fruit, insects and leaves. Males weigh 7-10Kg and females are abou half the size. The live in a harem structure. There numbers are in decline. 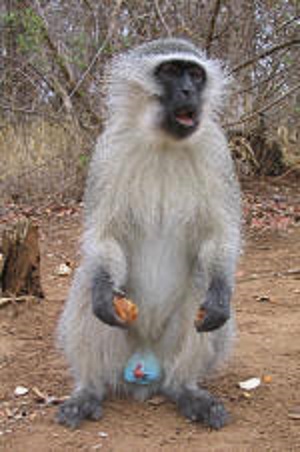 The vervet monkey serves as a non-human primate model for understanding human genetic and social behaviour. They have human-like characteristics such as being susceptible to high blood pressure, anxiety and social and dependant alcohol use.

They live in groups of between 10 to 70 individuals.  Their conservation status is "of least concern".

They have colour vision which helps them to distinguish between green and ripe fruit. They inflict serious damage to comercial fruit orchards.

The out-of -control spread of wattle trees has made it possible for the monkeys to extend their historical range.

They have become used to, and lost their fear of humans as a result of people feeding them. As a result many people regard them as pests.

Often common and abundant. However, very patchily distributed over its extensive geographic range, probably due to its need to drink water daily. Regarded as a pest species in cultivated areas in parts of its range.The current population trend is "stable". This info has been taken from the Red List.