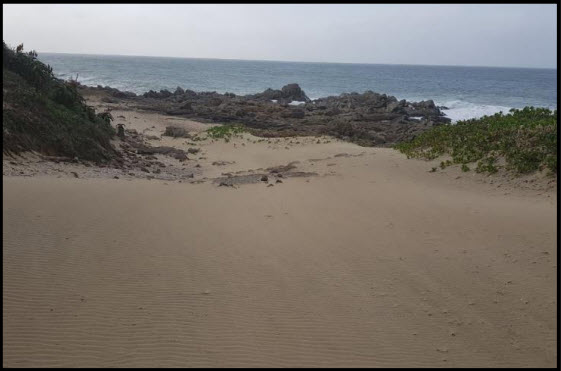 1.  BACKGROUND
Green-scene environmental has been approached by the Leisure Bay Conservancy to compile a rehabilitation plan for the placement of vegetation on the exposed sand dunes in Drakes bay, located in Leisure Bay, Ugu district municipality. The Leisure Bay Conservancy consists of a small group of volunteers who are home owners in
Leisure Bay. The Conservancy is dependent upon donations from a handful of property owners for funding, needed to undertake a wide range of environmentally concious activities that promote environmental protection, conservation and actions to retify envrionemntal isues in the Liesure Bay Area. The area is currently undergoing sever erosion by both natural (wind erosion) and human causes and re-vegetation of the exposed sand dunes is required as a pro-active solution to the current problem. This Rehabilitation Report seeks to provide guidelines for revegetation and restoration of the sand dunes whilst following the best environmental practices.

2. SURROUNDING ENVIRONMENT
Vegetation on the beach and dunes tends to occur in zones, according to the degree of exposure to harsh coastal conditions e.g. the incipient fore dunes are closest to the sea and are characterised as the pioneer zone. This zone is colonised by pioneer plant species that can tolerate exposure to salt spray, sand blast, strong winds, and flooding
by the sea. They are often protected by waxy or hairy coverings on stems and leaves and grow low to the ground, offering little resistance to the wind. They have strong root systems and spread rapidly; creating a mesh of creeping stems so if one part is buried in shifting sand or uprooted another part can continue growing.
They thus serve to stabilise the sand, forming and building dunes. Secondary species have an important function of stabilising seaward of the foredune crest. Their survival mechanism relies on an adaptable growth habit and capacity to reseed prolifically; they cannot develop quickly and require the stabilising influence of primary species to establish successfully. Permanent tertiary species occur on and behind the ridge of the foredune. These plants are slow growing and highly interdependent in that they need to cooperatively maintain an unbroken canopy. They form the stable hind-dune. The various zones are not fixed. As plants grow taller and humus, such as dropped leaves, accumulates, exposure to sun and soil conditions change. The soil becomes richer and holds more water. This enables scrub and woodland plants to move in, changing the type of vegetation by a process called succession. 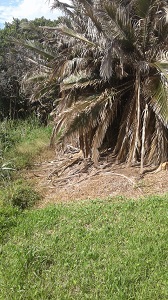 The existing site conditions show steep exposed sand dunes that are not natural and have been eroded, exposing the sensitive dune vegetation to the elements. It is crucial that these banks are planted as soon as possible to ensure that they are not further damaged. The re-vegetation will be a pro-active solution to the current poor state of the dunes as the roots of the planted indigenous species will stabilize the dunes. These exposed sand dunes need to be planted with indigenous species so as to prevent their erosion and protect the Admiralty Reserve. Certain indigenous species are growing on the dunes already and these should not be disturbed when planting the new plants on the site.

3. REHABILITATION PLAN
The Drakes bay dunes have been subjected to sever erosion by means of wind erosion that has left the sides of the dunes severely undercut well large areas of the dune being without vegetation. The current state of erosion is on the dunes in Drakes Bay is of high importance thus the stabilisation and subsequent rehabilitation of the dunes is of vital importance as a proactive solution to the current environmental degradation. The loss of the dunes through wind erosion possess a threat to the existing vegetation and specifically the milkwoods found in the surrounding area. The Leisure Bay Conservancy aims to protect the Drakes Bay dunes by implementing a Rehabilitation process that is inclusive of Bank stabilisation through dune forming fences(Shade cloth), the organisation is small in nature and depends largely on volunteer work and donations, thus the rehabilitation process is will incorporate the following aspects:

3. The rehabilitation process will not involve irrigation by means of an irrigation system and will be rain dependant.
4. The large number of available indigenous plants will cover any loss anticipated due to hydration of the vegetation (If rainfall is low)
5. The natural materials used as mulch and matting material have all been sourced donations as by-products of surrounding clearance of areas(The vegetation was already pruned/removed and was in the process of being removed as natural waste thus not trees were cut down or removed for the revegetation process).
6. The conservancy has a goal of improving the current state of the dunes and aims to protect the integrity in the long term.

A. IDENTIFICATION PROCESS FOR THE DUNE REHABILITATION PROCESS:
1. The identification process for the dune rehabilitation of the site including,
2. The cause of the damage and whether it results from natural forces or from human activities will be identified.
3. Design phase - A detailed dune rehabilitation plan will be developed where inclusive of:

4. The rehabilitation phase - Reinstating and revegetation of the dune.
5. Maintenance and monitoring phase -The final phase of the rehabilitation process to ensure the processis successful. This phase ensures that the on-going maintenance requirements are understood andincorporated, and that progress is periodically inspected and evaluated until a satisfactory level ofvegetation cover is reached.

B. REHABILITATION TECHNIQUES:
The following steps will be taken as part of the rehabilitation process:

1. Dune rebuilding using dune-forming fences
The principal function of a dune-forming fence is to reduce the wind velocity, thereby causing sand to be deposited in the vicinity of the fence. This technique can be used for small blowouts, for larger scale dune formation and at sites where it is not feasible to import new material. However, these fences are generally used on smaller isolated blowouts that are still surrounded by functional dunes and vegetation. Dune-forming fences are useful in environmentally or culturally sensitive areas where it is undesirable to use earth moving equipment or where access is difficult

2. Dune Stabilisation
Once the dune has been reformed, the next step will be to immediately stabilise the sand surface against wind erosion so that vegetation can be established. A common technique is to stabilise the dune surface with plant material using brush matting or spreading of mulch. This will stabilise the dune if time is required for sand
moisture and salinity conditions to become more favourable for the establishment of dune vegetation as well as encourage sand trapping. Pioneer species can be planted in conjunction with the use of plant material stabilisers, but should only be done if the moisture and salinity conditions are favourable.
Mulch
In less exposed dune areas where the susceptibility to wind erosion is lower, a satisfactory level of surface stability can be obtained by using mulch. Mulch assists with retaining soil moisture and provides protection for seedlings from strong winds, the sun, and rain. Suitable materials for mulch include grass cuttings,
leaves, bark chip, and sawdust. Materials that provide coarse, fibrous mulch that will not easily blow away are preferred. Other sources of mulch such as chipped waste from tree pruning and clearing operations will be considered if they are not a source of weed seeds. Seed, cuttings or potted stock of dune-stabilising
plants can be planted prior to spreading the mulch. Mulch that will be used during the dune rehabilitation process,
1. Will not be harvested from natural areas surrounding the site.
2. Will be free of weeds

Brush matting
Applying brush matting involves placing a layer of leafy branches over the bare sand surface. As the wind passes the brush and leaf tips, velocities are reduced and the sand surface remains intact. Windblown drift sand drops through and is trapped beneath the brush. The amount of sand that can be accreted by
brush is significant and the degree of protection it affords an otherwise bare sand surface is excellent. Brush matting withstands strong winds while keeping the sand surface stable. The original dune shapes are retained as the brush traps a uniform layer of windblown sand and it gradually buries itself. With
competent supervision, the brush can be obtained and spread by relatively unskilled staff. As the brush eventually decays it adds organic matter to the sand, improving its nutrient status and moisture-holding capacity.

GREEN- SCENE ENVIRONMENTAL
During the rehabilitation of the dunes:

SUGGESTED PLANTS TO BE USE DURING THE REHABILITATION:

4. REVEGETATION BY THE LIESURE BAY CONSERVANCY
The conservancy will propagate their own indigenous plants from seed and cuttings and occasionally receive
donations of plants from a local Indigenous Nursery.

Plants to be used during the rehabilitation process:

The Leisure Bay Conservancy currently has:

The following plants will be propagated and will form part of the planting list: 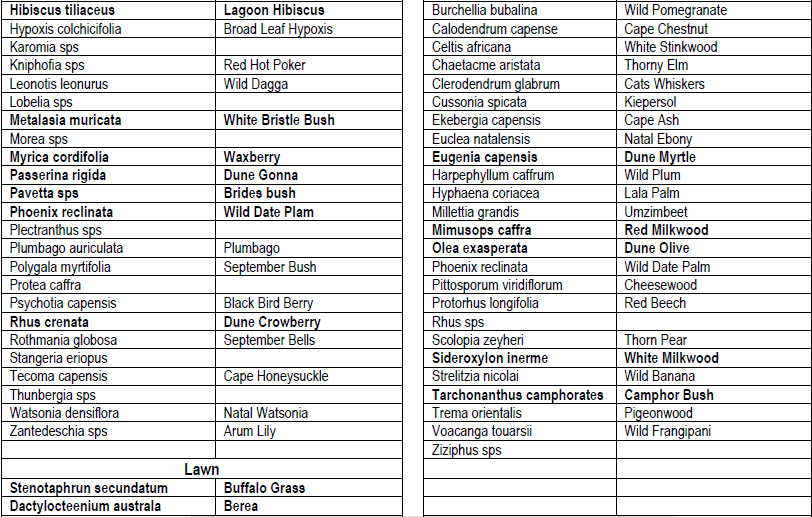 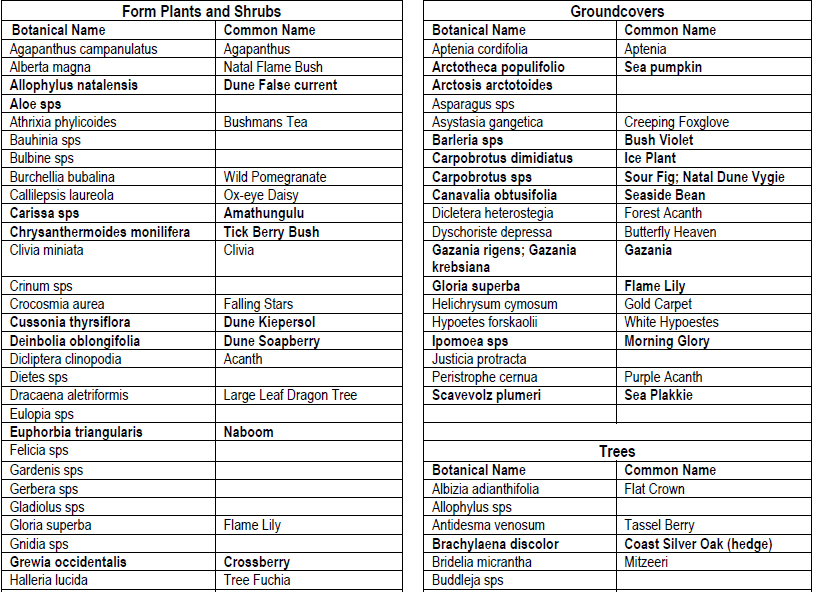 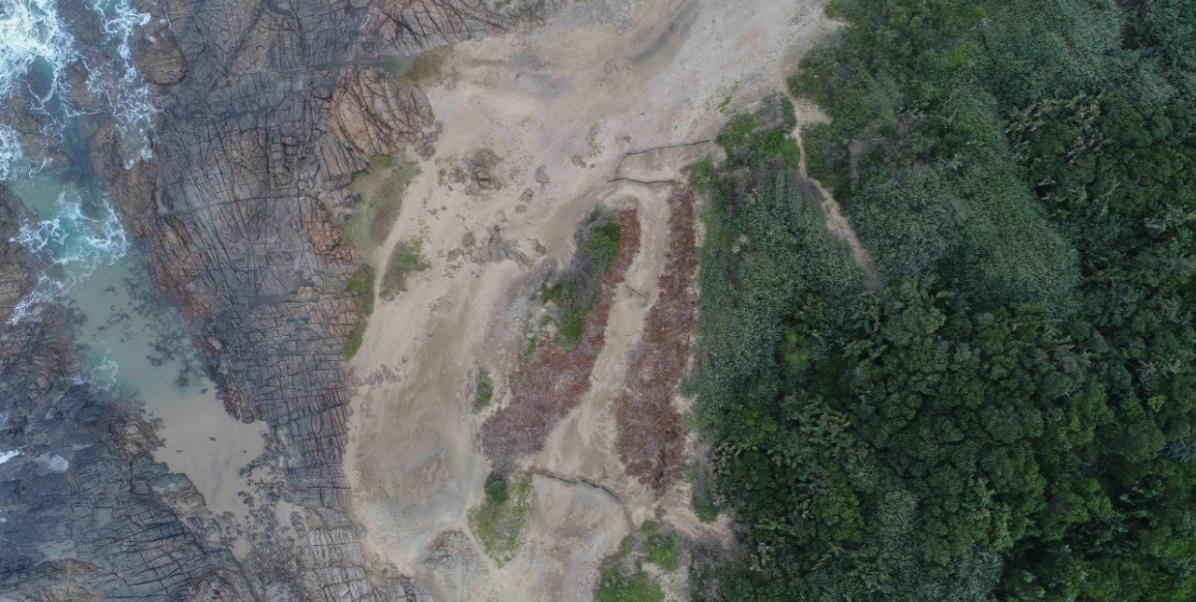