Deciduous tree to 20m. Crown wide, flattish to rounded. Usually in deep sand. Tall with creamy grey bark.developes rough round flaky patches. Leaves drooping, alternate, to 350mm. Stalk up to 60mm. Leaflets in 3-7 opposite pairs. Leaves glossydark green and wavy. Staks twisted. Spring leaves are shiny coppery.Roots used for Bilharzia, and for eye complaints. The wood, known as chamfuti, is used for furniture, canoes and mealie stampers. It is  a hard, beautiful red-brown and polishes well. It is also termite resistant. Good large shade tree and makes good bonsai. Grown from seed. Flowers consist of one large petal, green on the outside, red inside, 4 green sepals. Flower are scented and occur in long erect racemes in September to December. The pods are dark brown, large, up to 180X65mm, 20mm thick. When split hey expose a white interior with large black seeds with scarlet arils. Hornbills, monkeys and rodents eat arils and seeds. Flowers eaten by animals when fallen. Seeds also used for ornaments and curios, used medicinally and magically.

Deciduous tree up to 25m high. A beautiful tree with a relatively flat crown. The perfect shade tree for the large garden as the canopy allows filtered sun to pass through.

It grows tall and straight and has grey-brown slightly rough bark. The wood is light, pale brown, turns well on a lathe and used for  parquet floor tiles. Also hut building, wagon building and firewood. The poles are used for hut building. 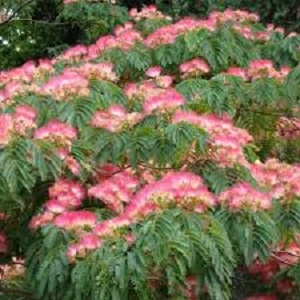 The seed pod is large (130X94mm) and produced prolifically during January to December. The pods and seeds are eaten by blue duiker. Foodplant of two charaxes, Common Sailer and Kersten's Hairtail butterflies. The flowers are pink and white, feathery and scented.

The leaves are up to 400mm. The leaflets occur in six to fifteen pairs, dark green and hairier below. The leaf stalk, rachis and young leaves are covered in fine rusty hairs. The leaflets are rectangular with a diagonal midrib.

The leaves are used as a "sponge" for washing and the bark used as medicine, for instance to cleanse blood. This is a straggly shrub to small tree up to a maximum of 10m.

The stem is fairly straight to sturdy with grey bark. The leaves are ovate to elliptic with the base and apex tapered, shiny, dark green and hairless with a wavy margin. The net veins are conspicuous and the margins are have broad serrations. 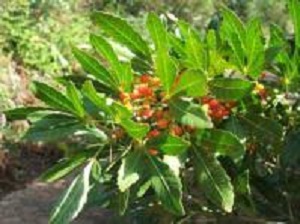 The flowers in February and May are small, white and sweetly scented. They are clustered on axillary, spike-like racemes.

The fruit is oval, red and on long spikes in March to September.

The wood is hard, densely grained and white.

It grows in moist warm climates. Also a shrub or small tree up to 10m. The multi-stem is sturdy. The bark is smooth or wrinkled and greyish-brown.

The branchlets are grey-white and minutely hairy.

The leaves are slightly hairy and narrowly elliptical with base and apex tapered.

The flowers are tiny white to cream, sweetly scented and in clusters on narrow, branched spike-like axillary racemes in profusion in March to July.

The fruit is shiny, red and round, fleshy and in clusters in profusion in June to August.

The flowers attract butterflies and bees. The fruit is eaten by birds and humans....makes nice jam!

The young leaves are browsed by bushbuck. The tree is slow growing. 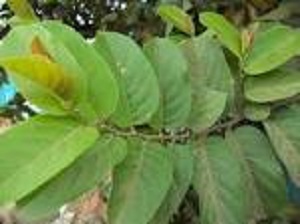 Semi - deciduous tree, up to 10m in height. Crown rounded to spreading. The stem is usually twisted with the branches low down. The bark is pale and flaky. The leaves are alternate, leathery, shiny and bright green with velvety, orange-brown hairs and raised veind looping before margins below. The flowers are pale yellow or reddish, depending on the gender, in profusion in long catkin-like spikes in October to January. The flowers have a strong honey scent. The bark is used medicinally for stomach complaints. The wood is used for fire making and hut building. The leaves are browsed by buck. The berries in bunches (tassels) are white to red and when black are eaten by people and monkeys and birds. They are delicious and taste a bit like apple.

They are grown from seed. This is a small often stunted shrub, sometimes a small tree of up to 5m. It is common on Msikaba Formation sandstone. It can be found from Port St Johns to Oribi Gorge. The stem is short and the bark grey. The branches are thick, at first pinkish, reddish or purplish.

The leaves are broadly eliptical to round, unlike the next shrub, which has leaves a bit more ovate and not round. The apex is usually round.

The leaves are blue-green, leathery, stiff and snap loudly. The stalk is usually reddish, up to 20mm. The flowers are white and scented. Inflorescence mostly terminal and more or less erect.

It flowers October to February.

Named after Tony Abbott. For information on Tony, see "Education". 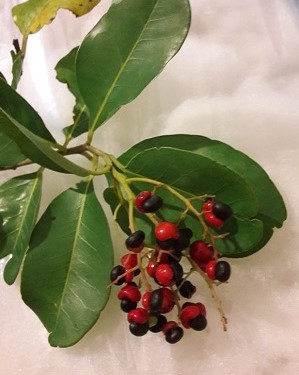 In forest, bushveldt and on rock outcrops. The stem is smooth, becoming rough and grey with white patches. On the coast they develope white horizontal bands. The leaves are soft, leathery and ovate. They are shiny green with a pale midrid. To confirm the ID, crack the leaf and carefully twist apart. Fine thread connects the two parts. The flowers are abundant and are sweetly scented in September to April. The fruit is black, small and more or less round, partly covered by a kidney-shaped orange to scarlet appendage, which is usually black in coastal KwaZulu Natal.

Birds eat the fruit. The bees love it in the early morning. Quick growing from seed. 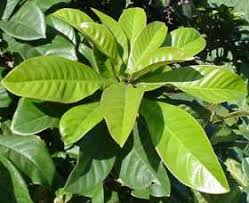 Racemosa suggests that the flowers hang in racemes, hence the name.

A most beautiful tree up to 10m (it could reach 20m in certain conditions).

The stem is tall and straight, with the branches high up in the forest. It is shorter and stockier in the open. The bark is smooth, with raised dots or lines, greyish-brown or mottled. The branches are marked with leaf scars.

The leaves are in spiral clusters on branch ends, very large and obovate. 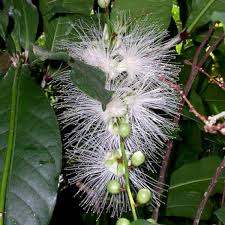 The flowers are in hanging racemes. The buds are shiny-red. Large "powder-puff" flowers stay open all night and fall in the morning into water below the trees and give off an unpleasant smell in November to January.

It is the foodplant of the Red-tab Policeman butterfly. Used against fever and the bark as fish poison.

Quick-growing from seeds and tolerates wet and dry conditions. Sensitive to frost. This is a protected tree. Beautiful scrambling shrub growing up to two and a half metres.

It has a narrow distribution in Natal. Also Eastern Cape.

The leaves are small and divided to the leaf base. The leaflets are generally small, 9-30mm and asymmetric. The stalk up to 15mm. 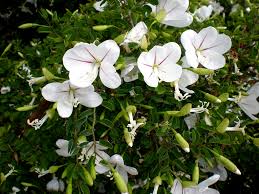 The flowers are solitary and terminal, produced in profusion.

They resemble a miniature azalea.The petals are white with mauve-red main veins and large. They flower from October to April.

They are quick growing and bloom all Summer in full sun. They thrive in poor soil.

A must garden plant. This is a small tree growing to 10m. It has a dense crown. The bark is grooved, roughish and green-brown. The stem is straight with angled branchlets. The flowers are tiny green racemes. The fruit is a small green capsule with three horns.

The wood is yellow and hard, fine grained and smooth. The wood is best from inland slow-growing trees.  It is similar to European Boxwood.

It is used for modelling tools, model making, musical instruments and wood engravers blocks. Generally overused and can no longer be exploited for timber. This is a shrub or small tree up to 3m plus a little more. It is straight and slender with horizontal branches. The bark is light brown and corky. The young stems are green. The branchlets are grooved.

The leaves are opposite with a drip tip, thinly leathery and shiny dark green. The flowers are greenish with prominent yellow anthers.  The fruit is greenish-brown with three horns. The wood is similar to the above tree. Stems used for building. They are termite resistant. This gorgeous shrub or small tree (up to six metres in the right environment) has a short, crooked multi-stem. The bark is smooth pale-grey brown which gets rougher and darker with age.

The young twigs are hairy. The leaves are opposite, broadly ovate to elliptic. They are shiny, dark green, paler below, with with veins raised with fine grey hairs. The margins are rolled under. Flowers are orange to red, softly hairy and tubular. They flower in round, dense terminal clusters from September to December.

Birds feed on the fruit and copius nectar in the flowers.  The bark and roots are used for many health complaints and for charms. The wood is hard, dense and fine grained.

It is medium to fast growing from seeds and cuttings and enjoys sun. This is a shrub to small tree (8m). It is common in dune and coastal forrest. It generraly has a multi-stem, but sometimes singular. It is generally much-branched and untidy with a straggling crown. It often touches the ground. The bark is pale to reddish-brown, grooved longitudinally.

The leaves are spiralled, oblanceolate to obovate. The base tapers into the stalk. The apex is rounded to pointed. The lwaves are thin and leathery, dark green and white-silvery below. The veins are conspicuous, margins entire or irregularly serrated. The flowers are creamy white in large, terminal displays. The heads are large, distinctly stalked with many flowers per head.

Quick growing and very useful for stabilising coastal sand, which helps to stop homes from disappearing into the wild blue yonder! This is a medium to tall deciduous tree which can reach up to 20m. The stem is tall, straight and broad with longitudanally striated grey bark which becomes mottled and rough with age. The leaves are dark green, large and ovate with pointed apex, 3-5-veined from the base, alternate and smooth, but hairy when young. The margin is serrated.

The leaves turn yellow and fall during dry periods. The stalk is +-  70mm with two small knob-like glands at the junction of the stalk and leaf.

The flowers are cream on long terminal inflorescences.

The fruit is a round, three-lobed orange capsual up to 30mm in diameter from December to May.

Beetles, flies, bees and moths are attracted to the flowers. The fruit attracts birds and monkeys. Bushpig and blue duiker eat the fallen fruit. Spittlebugs are often found on the branches. Although poisonous, bark and leaves are used to treat fevers and breathing problems. The wood is soft and light and burns even when green. A good shade tree. 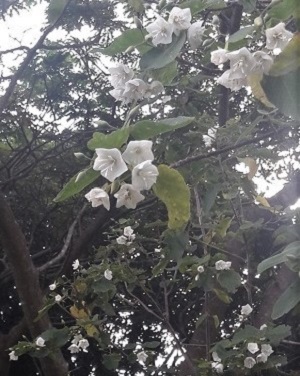 This is a small, ornamental diciduous tree covered in show, snow-white, sweet-scented flowers from March to May. It reaches a height of 5-8m and is commonly used as ornamental trees in gardens.

The leaves are alternate, simple and ovate and spiralled and somtimes lobed and heeart-shaped. They are serrated, thin and dark green and coarsely hairy.