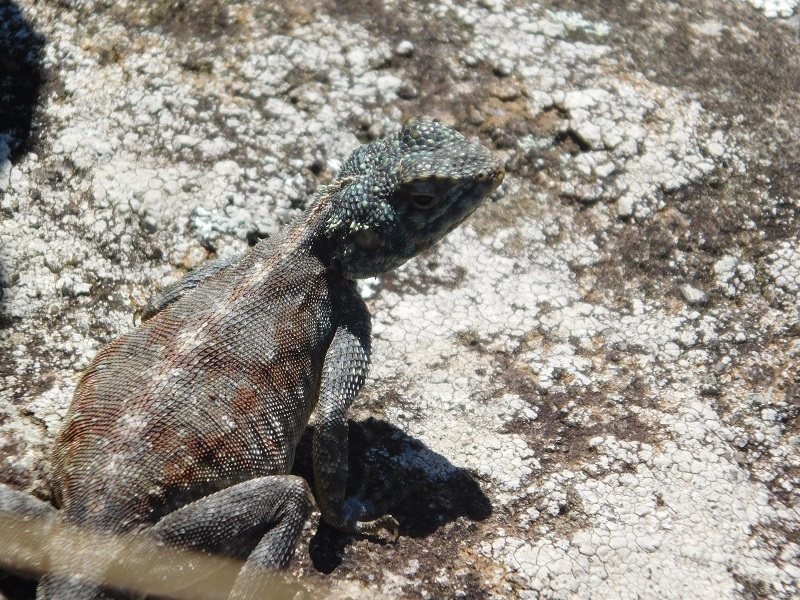 Called the blue headed agama by some, these reptiles form colonies on rock outcrops, presided over by a dominant female and male.

They are +- 20 - 25cm (rarely 30cm) and have a bluish throat. The breeding males have an ultramarine head which fades when threatened.

Their diet consists of ants and termites and are preyed upon by kestrels. 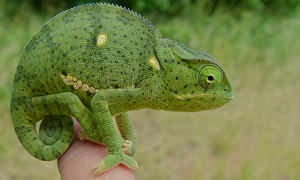 This lovely chameleon was once a common site in Leisure Bay, but because of certain superstitious people and visitors taking them home as pets, they have been in decline over the years. The monkeys also have their fair share of blame.

Fortunately the numbers seem to be improving. It is best to look for them at night when they turn blue-white in colour. They are totally harmless.

They are about 20-25cm in length. There is a flap of skin behind the head. They usually have a pale stripe down the side of the body and pale spots on each shoulder. They eat flying insects, spiders, snails and centipedes.

Although not all the geckoes listed here occur in Leisure Bay, They have been included for the sake of interest and to show the diversity of the species in South Africa. Many are kept as pets, and unfortunately many are imported as pets. When imports escape, they threaten the existence of local populations. 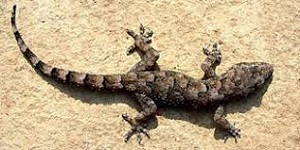 Though you may find plenty of these creatures in your home, they are arboreal and nocturnal. Males are territorial and fight with terrible passion. If you hear a load "tik-tik-tik" in your home, it is probably two males having a barfight!

They can reach as much as 17cm in length. They feed on moths, flies, cockroaches and even small lizards. I have watched them taking mosquitos as well. They may be confused with Tasmin's house gecko, shown in the following pic. I was told that this was an invader and was threatening the endemic one. 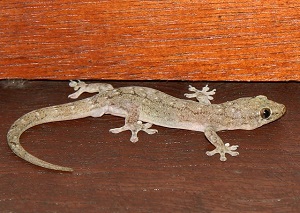 Although different in appearance, they are the same. This one is not as patterned as the one above. They are both prey on unwanted insects in the home. 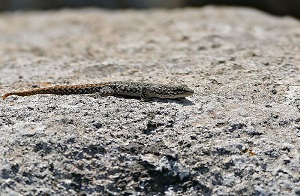 Another gecko Endemic to South Africa. This gecko is common in Mpumalanga and southeastern Limpopo, Gauteng, the northeastern parts of North-West Province and western Swaziland. Its range extends southwards to northern KwaZulu-Natal. 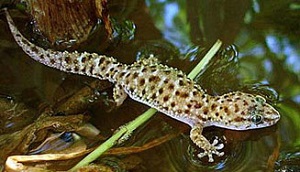 This gecko is common to the arid Western parts of South Africa. It has a body length of about 45mm with a tail of about 38mm to make up the overall length of 83mm. From above it is greyish-brown with lighter spots and sark blots arranged in stripes over the back. 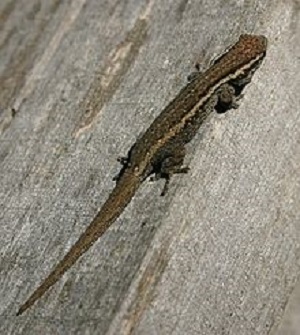 This gecko can be found on the KwaZulu Natal East coast. The snout to vent length (or body length without the tail) is 40mm for males and 44mm for females. The throat is stippled with grey or brown and the belly is cream. The back is grey-brown with a streak from the snout to the vent and beyond.

The tail is covered in adhesive lamellae so as to be used as a fifth limb. 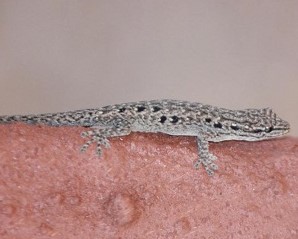 Similar to the Spotted dwarf gecko, this one is unlikely to be found here, being endemic to southern Limpopo, Mpumalanga and an isolated sub-population in North West Province. 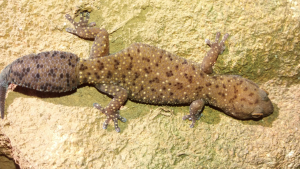 This gecko is native to Gauteng, eastern North-West Province, and large parts of Mpumalanga and Limpopo, exclusive of most of the Lowveld and Limpopo Valley. It does not occur in KZN.

It was originally regarded as a subspecies of Pachydactylus capensis, but was found to be genetically distinct from -capensis.

This gecko is large and robust (snout-vent length 10cm).

This gecko is nocturnal.

It does not occur in our area. These are small, nocturnal geckoes with long tail and smooth skin. They range in colour from white and grey to brown and fawn.

The female does not require a male to reproduce.

It is found accross the Pacific region and is a major problem in KwaZulu Natal.

They are brought in by shipand carry pathogens and diseases.

They are adaptable in their habitat and have been found in mangrove trees and on bare rocks on the shore, in the leaf axils of palms, behind the bark of trees and in houses.

They are prolific breeders, usually lay 2 eggs communally, glueing their hard-shelled eggs almost anywhere. They take about 60 days to hatch. 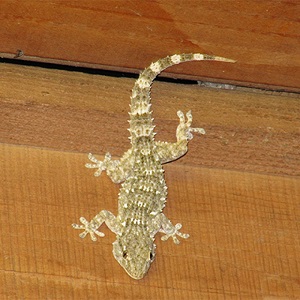 This is a native to the western Mediteranean area of Northwestern Africa and Europe. They can measure up to 15cm nose to tail-tip. Mainly nocturnal, it also appears during the day. They enjoy sun in their refuge.

They have an impact on native fauna, preying on frogs and smaller lizards. 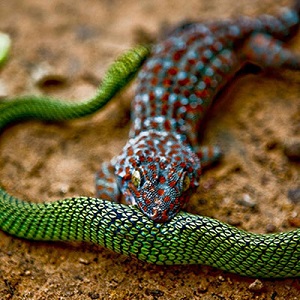 This invader hails from India, Bhutan, Nepal and Bangladesh throughout southeast Asia and the Phillipines to Indonesia and western New Guinea. Yhey are territorial and will attack any gecko species, as well as anything they regard as a threat to their territory. They are one of the largest geckoes, reaching a length of 35cm.

They are a serious problem in KwaZulu Natal, Limpopo and the Eastern  Cape.

They spread mainly by the pet trade. Foreign nationals are willing to pay thousands of Rand for large specimens for their medicinal value or as commodities in the wildlife trade.

While they do eat pests such as cockroaches and locusts, they also eat small mammals, birds, frogs aand other small reptiles, thereby harming the natural biodiversity in the region.

The eggs are guarded by both parents. Found in the highlands of Asia and throughout Afghanistan and northern India, they have moveable eyelids and caannot climb smooth surfaces.

They have becom very popular as pets and are for sale on various websites. There are also vast numbers of sites that instruct owners on care. The geckoes in captivity will most often refuse to eat dead prey They prefer to hunt for their food. They require vitamin 3D and calcium in their diet. They have good eyesight and sense of smell. They hunt their orey something like a leopard would, moving their tail and striking when the moment is right.

They are larger than other gecko species and the male adults reach 20-30cm. This common lizard makes an interesting and long-lived pet, if you can catch it! They move very fast and drop their tail when you try to catch them. The are nervous to begin with and bite readily, but easy to tame. The male develops a bright red or light blue throat in breeding season.

They eat grasshoppers, millipedes and termites.

They grow to a maximum of 54cm. 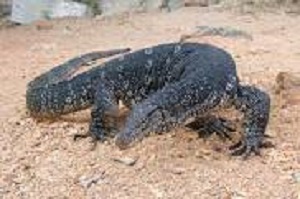 A friend of mine in Banners Rest thought he had a huge rat in his roof. When he opened the trapdoor a huge crocodile stared at him. He fell off the ladder. Fortunately he was not hurt. They reach a size of about 1.5m. They are related to the komodo dragon of Japan. Their tails enable them to move at very high speeds through water. They have long hook-like claws and can climb verticle surfaces. They will run away fast, rather than attack. They will not harm pets unless attacked. When cornered they wil hiss a bit like a puffadder. Their diet consists of rats, frogs, snakes, lizards, birds and chicken eggs.They are not dangerous unless cornered, so leave alone and admire!