Whales and dolphins can be divded into two major groups or sub-orders. Baleen whales (Mysticetes) have two blowholes and whalebone plates hanging from the roof of the mouth for filtering food. The rorqual are also of this group and are distinct once again for having a series of longitudinal grooves extending from under the throat to behind the pectoral fins. These grooves allow the throat toexpand like a concertina, thereby increasing capacity while feeding.

Toothed whales (odontocetes) only have one blowhole and have teeth. Dolphins are in fact small, toothed whales of the family Delphinidae. All species of Cetacea have a horizontally flattened tail or fluke, and flattened forelimbs forming the pectoral fins while most species have a boneless dorsal fin on the back.

Cetaceans breath using lungs and need air from the surface. They are highly intelligent, aquatic mammals and produce a large vocabulary of sounds for communication and echo-location.

Many species of whale were hunted to the brink of extinction by the mid 1960's. In some catacean populations there has been an encouraging rise in numbers, especially the southern right and humpback whales. However, the conservation status of most species remains vulnerable. Commercial fishing practices, gill nets and pollution, especially plastic waste, still affect the dolphins that inhabit coastal waters worldwide. 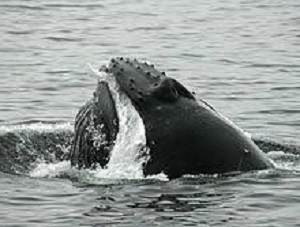 Classed as rorquals due to distendable throat grooves, but significantly different in appearance and biology to all other rorquals, so represent a seperate, single species genus - Megaptera.

Underside of fluke tends to be white.

3 rows of tubercles on the large head.

Seen on East coast from June to January in groups up to ten and sometimes singly with calves.

Songs passed onto other whales within the population. 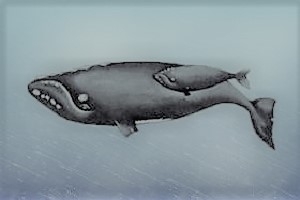 Large rotund body up to 16M.

Mostly black with a few mottles.

The mouth describes a high arch and the head bears numerous warty growths, called callosities, being differently patterned on individuals.

They have a distinctive blow and can be recognised by their V-shaped spout.

Testicles can wheigh up to 500kg each!

Calves (up to 5M and 5 tonnes at birth) consume up to 600L of milk per day. Calves may be entirely white.

Feed on copepods and krill during summer.

They return to SA each year and sightings reach a peak in August to October, but may be seen June to November.

Since cessation of hunting, the population is increasing exponentially at 7% per year. The population should double within the next 10 years. This whale was the most hunted of all whales, hence the name "right whale" - the right whale to hunt. 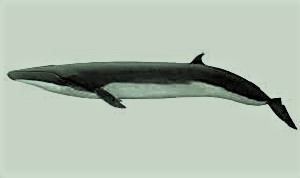 Difficult to distinguish from the Minke whales, but have 3 distinct ridges along the top jaw which are not found in the other species.

There are two populations off W and E Cape - one remaining off-shore & migrating seasonally, the other more or less resident  in shallower waters.

They are shy and not often seen. Sightings are most common from late summer into winter while often seen running with common dolphins. 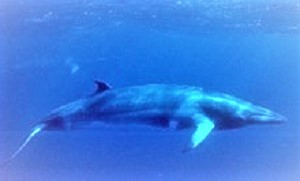 Most abundant & smallest of all baleen whales, up to 10M long.

Pectoral fins have a white band & the dorsal fin is prominent and erect.

From above, the head is pointed in a V shape.

Sightings are rare in South Africa. 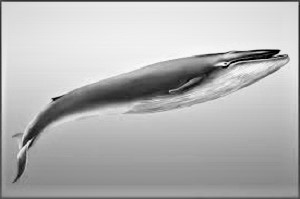 Head is broad & pointed with a ridge running from tip to blowhole.

Distendable throat has over 40 grooves & the top jaw has over 300 baleen plates on each side to filter food. 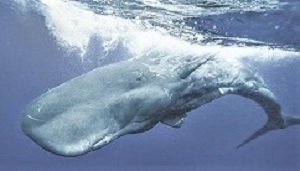 This is a toothed whale and most widely recognised.

Males can attain 18M and weigh up to 45 tonnes.

Body shape is unmistakable, the same shape as in legends & myth. The large square head is almost 1/3 of the total body length.

No distinct dorsal fin, but a row of bumps along the back towards the tail.

Lower jaw long & narrow with 18 - 25 large conical teeth that fit into sockets in the upper jaw.

Single S-shaped blowhole on the front left side of the forehead. The characteristic blow is forward & to the left. Colour can be blue-grey to light-brown to white in old age.

Once highly prized for the large quantity & unique propertiies of the spermaceti oil found in the head. This organ dominates the vast head & focuses the click sounds & sonic pulses that they use to communicate.

Seldom found in coastal regions as they are adapted to deep water. They have been recorded at depths of over 3000M. They can remain submerged for over two hours. 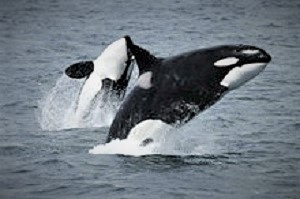 The largest of all dolphins  up to 9M and 8 tonnes.

Dorsal fins up to 2M.

Hunt in packs for squid, fish, birds, seals, sharks, dolphins & even other whales - the top of the marine food chain. However, they disregard humans as a viable food source. A trainer killed by a captive animal is the only known human to have been attacked. 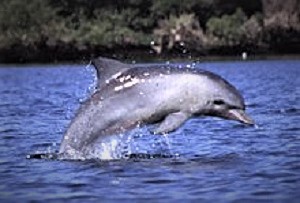 The beak (rostrum) narrows abruptly from the head.

T. aduncus is the most frequently observed inshore species, up to 2.4M in length. T. trucatus is much larger, up to 3M & twice as heavy & not often encountered inshore in SA.It also has a noticably blunt & ubruptly sloping forehead & a shorter rostrum.

The average group size is 20animals in KZN, less than in other areas, where they can reach groups of up to120. This is probably due to them being caught in shark nets in the region.

Of all the dolphin species, they are the most inclined to interact with humans. 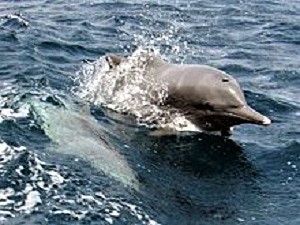 Body robust, dark-grey to brown on top & paling underneath.

The most distinctive feature being the long & shallow hump located behind  a small & hooked dorsal fin.

In SA the population is small, estimated at only 1200 animals. Groups of between 3 & 20 can be found along the entire coastline between Cape Town & Mozambique.

They are shy & keep away from boats & humans.

They feed on reef & estuarine fish, exposing them to pollutions & toxins. These toxins, runoff from farms & factories, are passed on in great quantities to the offspring, which cannot tolerate the strength of these chemicals.

Sightings are year round. 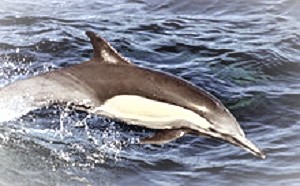 Less robust than the bottlenose, reaching a length of 2.5M.

Body is dark-brown to black with characteristic, orang-brown, figure-of-eight markings on the sides and a creamy white underbelly.

A dark stripe extends from the pectoral fins to the lower jaw & another joins the back of the beak to around the eye.

They may live for over 40 years.

They are usually found in groups between 500 and 3000. They are gregarious and love boats. They will utilise the bow wave and wake of the boat in order to save energy. At speeds as high as 20 knots, they will "porpoise" & leave the water entirely. They are very common during the sardine run.