INVASIVE ALIEN PLANTS (IAPs) (as described by the SA National Biodiversity Institute)
(SANBI) see www.sanbi.org and www.invasives.org.za
“IAPs are those plants that have been introduced into South Africa from other countries and have
the ability to spread into local habitats, without the direct assistance of people. These plants often
spread profusely because they lack natural enemies (including diseases or animals that might feed
on them) and therefore easily outcompete and smother natural vegetation and crops. For this reason,
IAPs are considered a major threat to biodiversity, human livelihoods and economic development.
The impacts caused by IAPs include, but are not limited to:
= increased flood damage
= competition with agricultural crops
= displaced indigenous plants and animals and reducing biodiversity
= increased water loss from catchments
= increased severity of fires, and
= expanded range of disease-causing organisms
Invader Alien Plant Legislation
In recognizing the threats posed by invasive plants, the government of South Africa has provided
legislation that either prohibits certain listed weeds and AIPs, or controls their use through a permit
system. This legislation is the Conservation of Agricultural Resources Act which lists about 200
plants which are then grouped into three categories:
Category 1: Invader plant species which may not be grown and must be controlled.
Category 2: Invader plant species with commercial or utility value which may only be grown with
a permit under controlled circumstances.
Category 3: Invader plant species which have amenity value and which may be grown, but not
planted, propagated, imported or traded. You may not grow Category 3 plants within 30 metres of
watercourses and the Department may instruct you to control Category 3 plants in other areas.
NOTE: It is illegal to have Category 1 plant species on your property, and contravention of this Act
can result in prosecution, as will the harbouring of Category 2 plant species without the required
permit.

WHICH INVASIVE ALIEN PLANTS ARE MOST COMMON IN LEISURE BAY? 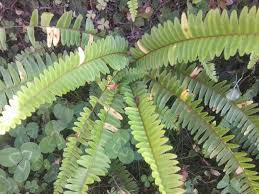 Impact: This herb is a good example of exotic species establishing themselves & having the potential to spread and replace indigenous vegetation.

Origin: Taiwan. Still popular as a garden plant. It has been deliberately spread along tourist routes in an attempt to beautify the scenery.

Impact: It can tolerate infertile, dry and sandy soils & can out-compete indigenous vegetation. A danger to the Grassland Biome. It is a major aggressive weed in Hawaii and has the potential to become a real problem in South Africa.

Control: Unwanted plants should be dug out, including bulbs and small bulbils and the old bulb, destroying them by burning. There are no registered herbicides for these plants.

Origin: Central America and the Caribbean.

Impact: Usually found on stream banks and plantation edges, where it competes with and replaces indigenous species. A serious problem in many areas.

Control: Remove physically, taking out and destroying the rhizomes. Difficult to eradicate with herbicides. 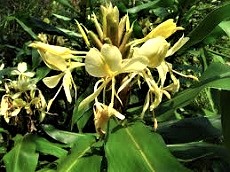 Impact: They grow from tough rhizomes, which make them extremely dificult to eradicate once established. No. 40 on the world's Worst Invasive Species list.

Control: Remove plants and the entire rhizomes. There is no registered herbicide for these plants. 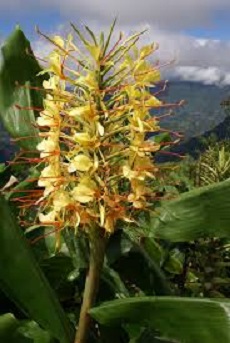 Impact: Same as above

Control: Same as above

These plants have now become established in parts of KwaZulu Natal and recently in the Kruger National Park and parts of Limpopo. The closely related Alpinia zerumbet from Eastern Asia is also potentially invasive and is found wild in parts of the East Coast and Kruger Park. It is common in gardens. 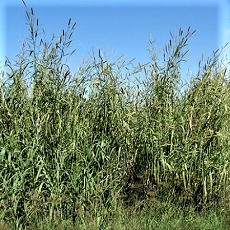 Impact: They were ornamentals that escaped into the wild. Now a common perennial weed of roadsides and waste spaces. It has a strong pioneering nature and can invade industrial areas. They replace indigenous vegetation.

Control: Industrial herbicides which are used on roadsides. 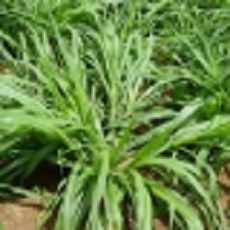 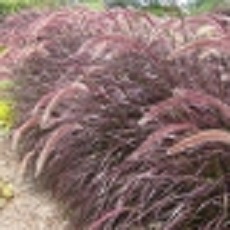 Impact: A serious weed affecting Eastern parts of SA, especially Mpumalanga & coastal region of KZN. Can be confused with Phragmites australis (Common reed) or Phragmites mauritiaunus (Lowveld reed). The latter two species are much less robust and lack the large leaf lobes. This reed can be beneficial in the right places, acting as an erosion control agent, filtering muddy floodwaters and being a haven for a wide range of wildlife. But it competes vigorously with indigenous species, destroying biodiversity, forming dense stands in riverbeds and on river banks. These stands obstruct access to water courses, increase siltation and will block rivers in times of floods.

Control: All reeds are difficult to control. Total removal of the rhizomes as the plants can regrow from bits left in the ground. Chemical use can be of benefit. Do not use cut stems as stakes! Lush regrowth must be sprayed with a systemic herbicide when the plant has reached a height of 1-2m, usually about 6 - 8 weeks later. Follow-ups are required fo effective long term control. Burn ALL cuttings and anything that has been pulled up.

Impact: They totally swamp and replace indigenous vegetation. On the plus side, Kenyan farmers use these plants as green manure.

Control: Remove plants manually, following up with herbicide on seedlings if necessary.

Origin: Asia from India to Japan, introduced as a garden ornamental.

Impact: It is highly invasive and spreads readily in forest understories.

Control: Uproot completely and remove since they can resprout when cut down or when the foliage is killed by fire. 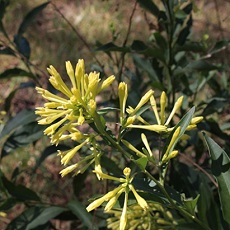 Impact: These plants can form dense stands, eliminating indigenous flora and transforming the landscape. They have a noxious odour during the day and smell sweet at night. The leaves stink when handled. Hluhleka Nature Reserve near Port St Johns is heavily infested.  Also found in the KwaZulu Natal midlands, Mpumalanga and Zimbabwe. Many areas of the coastal bush are seriously infested. The unripe berries, normally green in June and July, and the young shoots are very poisonous. Inkberry poisoning in cattle was first recognised in Chase Valley in Pietermaritzburg, hence the name Chase Valley disease.

Control: Suitable herbicide painted onto stems or cut stumps. It regrows vigorously if not eradicated completely.

Impact: This beautiful large leafed looking shrub / tree has beautiful blue flowers. Rub it's leaves, smell your fingers and you will know why it is called bug weed! It spreads like widlfire and is extremely difficult to eradicate and spreads readily.

Control: It developes a thick trunk which requires cutting down, and then the roots have to be dug up. Its unripe berries are poisonous. Hairy leaves and stems are a resperatory irritant and can cause rashes and asthma. Weeping Sage is an alternative plant for your garden.

Impact: Invades UNDISTURBED vegitation, totally swamping and replacing indigenous species. It replaces up to 100% of the plants growing in the area. Some caravan parks have lost caravan sites to this weed during the quiet holiday season. It is highly flammable and the green leaves are toxic to horses. In St. Lucia, it is threatening the survival of the crocodiles by shading and clogging nesting sites.

Control: It is difficult and costly because it is capable of vigorous regrowth from stem coppices, root succers and seed, which enjoy the heat of fires. Large plants have to be cut down and a suitable herbicide should be applied to the stumps. Small plants should be hand-pulled. It is extremely difficult to eradicate and needs to be stopped before it spreads.

Impact: It is regarded as one of the worlds 10 worst weeds, with some 650 varieties being major weeds in over 60 countries. It forms dense, impenetrable thickets, replacing indigenous plants, increasing erosion and seriously affecting forestry and farming activities. The plant cac also be toxic to cattle.

Control: Laborious and expensive. No point in pulling it out!  Spray foliage in Summer to Autumn. Pull small plants by hand when soil is moist.

Origin: It is possibly indigenous, imported from elswhere in Africa about 3000 years ago. Ricin poison as the name suggests.

Impact: The three-lobed fruits are extremely toxi to humans and animals (malpitte), and potentially fatal. The Zulu people use a paste for toothache. Little bit paste, No more toothache! It is not regarded as a serious invader except where ground has been disturbed for farming and stands cleared for housing that has not been built on. No-one is likely to groe this as a garden plant!

Control: Easily controlled by uprooting them. The site should be covered with leaves. It is generally sensitive to herbicides.

Impact: The source of honey for the bees (a positive point), The bright red berries in the summer and a favourite for birds. It is a vigorous invader and easily replaces indigenous species by shading them out. They are among the 100 of the worlds worst invaders.

Control: Cut down trees and apply Trichlopyr to the stems. Try not to disperse seeds.

Impact: They have escaped from gardens and have invaded disturbed areas and roadsides, replacing indigenous species.

Control: No herbicides have been registered for these plants and manual control is advised.

Origin: Tropical Eastern & Central Africa. It has become naturalised in South Africa and has become invasive.

Control: No herbicide has been registered and manual removal is advised.

Origin: The tropics of Central and South America.

Control: Remove by hand. Replace with indigenous species such as Eugenia Natalitia.

Impact: It has established itself in KZN coastal region, smothering indigenous species and restricting access because of its unpleasant spines.

Control: Triclopyr used as a foliar application. All cut pieces to be burned as the succulent stems can take root.

Impact: This beautiful climber can smother and replace indigenous vegitation.

Control: Nor registered herbicides. It should be cut back, uprooted or if necessary, cut down and the remaining stump treated with a herbicide.

Origin: North America and Europe. Some brambles are indigenous.

Impact: Only now becoming a problem in KZN by forming dense stands in the veld, on roadsides and in forests. They create impenetrable barriers.

Control: Treatment by specialised herbicides over a number of years.

Origin: Tropical and sub-tropical America. All Ipomoea with white centres are baddies. They replace indigenous species and are difficult to y destremove. The others are indigenous, although also regarded as troublesome. To my mind, they are beautiful, especially the indigenous variety (those without the white centres.).

Control: It is almost impossible to eradicate, the only possible remedy being hormonal herbicides, which may destroy your tomato crop too!

Impact: In KZN it is becoming a major problem in the sugar cane fields. Being a vine, it can smother entire trees and cause them to collapse.

Origin: Imported from Mexico for comercial purposes. Most pines are comercially important but tend to transform the landscape by invading disturbed land.

Impact: The seeds are spread by wind, animals and birds. They are  highly flammable, increasing the risk of major forest fires.

Control: Ringbarking is the most effective method. Seedlings and saplings can be uprooted.

Impact: This weed can entirely cover a dam, destroying biodiversity.

Control: Best removed by hand, as poisoned plants deprive the water of oxygen. The entire root system should be removed.

Control: They are virtually impossible to control. Registered herbicides can be used. The spread is to vast to control efficiently.